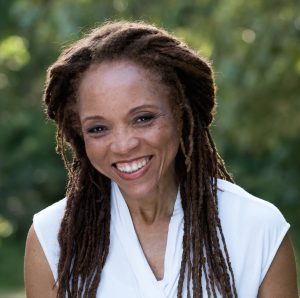 Sophfronia Scott grew up in Lorain, Ohio, a hometown she shares with author Toni Morrison. She holds a BA in English from Harvard and an MFA in writing from Vermont College of Fine Arts. She began her career as an award-winning magazine journalist for Time, where she co-authored the groundbreaking cover story “Twentysomething,” the first study identifying the demographic group known as Generation X, and People. When her first novel, All I Need to Get By, was published by St. Martin’s Press in 2004 Sophfronia was nominated for best new author at the African American Literary Awards and hailed by Professor Henry Louis Gates, Jr. as “potentially one of the best writers of her generation.”

Her latest novel is Unforgivable Love (William Morrow). She’s also the author of an essay collection, Love’s Long Line, from Ohio State University Press’s Mad Creek Books and a memoir, This Child of Faith: Raising a Spiritual Child in a Secular World, co-written with her son Tain, from Paraclete Press. Her essays, short stories, and articles have appeared in Killens Review of Arts & Letters, Saranac Review, Numéro Cinq, Ruminate, Barnstorm Literary Journal, Sleet Magazine, NewYorkTimes.com, More, and O, The Oprah Magazine. Her essay “Why I Didn’t Go to the Firehouse” is listed among the Notables in Best American Essays 2017. Her next book, The Seeker and the Monk: Everyday Conversations with Thomas Merton, will be published in March 2021 from Broadleaf Books.

Sophfronia is the recipient of a 2020 Artist Fellowship Grant from the Connecticut Office of the Arts. She was recently named the director of a new low-residency MFA in Creative Writing program being launched at a college in Michigan. Sophfronia has taught at Regis University’s Mile High MFA and Bay Path University’s MFA in Creative Nonfiction. She’s also delivered craft talks and held workshops at the Yale Writers’ Workshop, Meacham Writers’ Workshop, and the Hobart Festival of Women Writers. She lives in Sandy Hook, Connecticut where she continues to fight a losing battle against the weeds in her flower beds.