I am a writer. What does this mean? For everyone writes. School kids of age 6 and above write- even if only three letter words on a notebook. Are they thus writers also? A housewife/Homemaker writes: a grocery list on the back of a newspaper or via an App on her phone. Is she or he (sometimes today) a writer too? What about a teacher who spends 7 hours each week day writing something- something on that board? What really distinguishes mine from theirs? They from me? Why am I a writer, while they are not considered so?

It must be then not that I write, but what I write that awards this distinction. And how I write it: meaning Choice and Style. And in acknowledging these same, I am led to recognize the role of the writer, and further guided to understand that role as it pertains to gate keeping. This what rather than the how of it, is the breathing soul and essence of the writer. This task of choosing what to write about is what it’s all about.

Now the how; the frills, technique, all the permutations of style, are important of course. As important as dressing on salad. It makes the dish more palatable no doubt but doubt is absent as to which is substance and which is vinaigrette.  The choice therefore is the sacred duty. It is the one reason why I may in truth intone: I am a Writer.

Society herself concedes the fundamental part this plays in her structuring. Which is why she many times reluctantly, yet thoroughly, assures the freedom of the press: not to write, but to choose that which it writes. And that woebegone people which has not done this, which turns a blind, timid eye whilst others decide for the writer; well, its rewards lie in the very act it condones. It has chosen ignorance and not illumination, stagnation rather than progress.

So a writer selects- on behalf of society. And this is the crux of the revered creative process.

Thus, is the writer truly then a creator as popular thought caresses his vanity by so labeling him or her?  To create is to bring forth something, only from your being. It is not to form something from nothing as some in error hold as belief. This is an elemental impossibility.  However to birth from pre-existing matter- yourself; to further shape and modify it, that certainly is creation in its simplest sense. This is basically what the Divine CREATOR does; and many assert this is what a writer does also; create. As do all Artists: a sculptor, a painter, perhaps even a dressmaker.

This is a noble sentiment. Is it also nobly deserved? To borrow the very title of GOD is no small undertaking. So once more, does the writer create? Or… does he only look (at his world, a newspaper, a book or film), choose (a story, an issue, a point of view, a theme), and chronicle (organize and write) that which in essence already exists.

A finger now points out the creativity inherent in the vagaries of plot, the adroitness of dialogue, clarity of prose, the meandering double speak of poetry, in fact in the making of that one choice of many. Surely these count for something? Surely, at the very least, creativity of some kind or level only, could account for these?

Or again, by the simple act of so functional an action as the choosing of subject, or situation, or character, does not the writer thus irrevocably commit to the path of the story? And thereafter needs only follow the natural progression of the line, making additional selections in alternatives offered him at literary intervals. After all we do say “a good story writes itself.” Why then are we so swift to seize the credit and glory for its very creation?

A writer’s duty is sacred. The above do not demean or diminish this.  It is enough to be keeper of the gate. Mediation alone is sufficient.

The writer today needs to pause. He and she need to consider and realize that the real stories are out there, not born in him. If they are in his head, they are projected there. Consequently he needs to always face outward. His innate brilliance is of no essential consequence. His imagination is but a clearing house, fed constantly by the stimuli of everyday happenings around him. His lot is to be the mirror of his world. The Monitor to the CPU of society. Her constantly in use selfie-camera. The sooner he/she comes to terms with this, the more efficiently he can function in his or her GOD appointed calling.

And this calling becomes more crucial each day. For as no man may see himself without the use of a reflector, so it is impossible for society to truly know who she is save by the reflection of a writer’s pen, or his keyboard, or her film camera.

Hence, Writer, do not seek to create. Only diligently gaze, responsibly select, and faithfully record. GOD and all men of goodwill will hold you thereafter acquitted.

Joshua-Philip Okeafor writes as Joshua Kalu Ephraim from Lagos. Joshua describes himself as a GOD lover, a husband, a father, a writer and a Film director.

Joshua began his writing career at age 18 when an older brother gave him a four page outline of a children novel. That outline later became the manuscript “Gemini Predators”, a riveting tale of teen twin detectives on the hunt for a Military trained killer. A number of other novels followed as well as a book of short stories “Akuko Ndi Ala: Stories depicting Nigerian 90’s Society”.

The national publishing landscape in the middle 1990s was anything but conducive and Joshua veered into the more active field of screen writing. He has since written several films and TV Serials, amongst them “Rough Edges”, a TV serial syndicated on 8 channels nationwide,  “A Dangerous Love”, a film starring Ramsey Nouah, and “Spirit of the Assassin”, perhaps Nigeria’s most ambitious film till date. 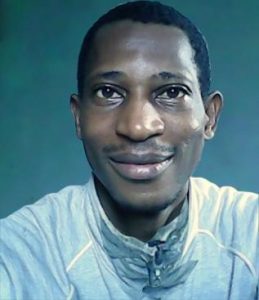